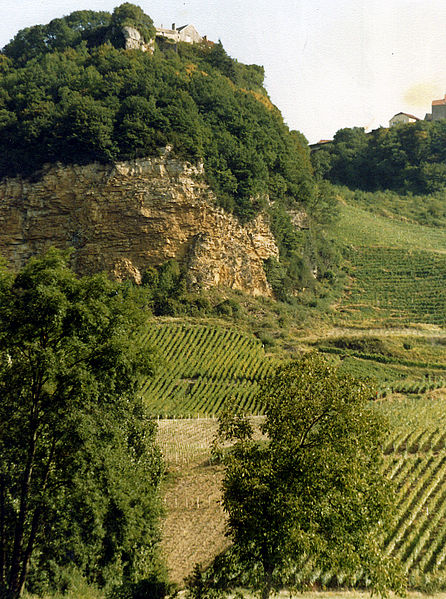 Jura wine is French wine produced in the Jura département. Located between Burgundy and Switzerland, this cool climate wine region produces wines with some similarity to Burgundy and Swiss wine. Jura wines are distinctive and unusual wines, the most famous being vin jaune, which is made by a similar process to Sherry, developing under a flor-like strain of yeast. This is made from the local Savagnin grape variety. Other grape varieties include Poulsard, Trousseau, and Chardonnay. Other wine styles found in Jura includes a vin de paille made from Chardonnay, Poulsard and Savagnin, a sparkling Crémant du Jura made from slightly unripe Chardonnay grapes, and a vin de liqueur known as Macvin du Jura made by adding marc to halt fermentation. The renowned French chemist and biologist Louis Pasteur was born and raised in the Jura region and owned a vineyard near Arbois. The climate of Jura is continental with many similarities to Burgundy but can be more aggressively cold, especially in the winter time. Ripeness levels of the grapes is always a concern for winemakers of the area and harvest times are often delayed as long as possible (usually well into late October) to try to achieve the highest sugar levels possible. To help lessen the threat of autumn frost, grapevines are often trained to the Guyot system. The majority of the region’s vineyards are found at altitudes between 820 and 1,310 ft (250-400 m) between the plains of the Bresse region and the Jura Mountains. The towns of Lons-le-Saunier and Arbois are the principal cities in the wine region. The vineyard soils tend to be composed of mostly clay in the lower flat lands with more limestone based soils in the higher elevation. Deposits of marl are scattered throughout the region with some of the area’s most regarded vineyards being found on those sites.